Last week I visited Kumasi on my way back up to Tamale to see what my colleague Mark Boots is up to with his venture Voto and to get a bit of a tour of the Kwame Nkrumah Institute of Science and Technology. We also got a chance to sit in on a meeting run through one of IDEO.org’s projects called Clean Kumasi. They’re trying to tackle sanitation issues in a neighbourhood in Kumasi where the practice of open defecation is common. They’re working with the community and aim to go through a Community Led Total Sanitation (CLTS) process, which I know a small amount about due to EWB’s work in the the water and sanitation sector in Malawi. It was an interesting couple of hours observing and talking with the facilitators followed by a couple of thoughts Mark and I discussed on our walk home that I thought I’d share here.

We got a bit lost trying to find where the facilitators, Fausti and Doreen, were holding the meeting but found one of Clean Kumasi’s signs, urging residents to text a number if they noticed feces in the area. As we were waiting by the sign trying to figure out where to go next, a woman walking by asked us if we were the ones putting the signs there. We said no and asked her what she knew about them. She said she didn’t know anything, or who put them there. We asked if she had ever called or texted the number on the sign and she said no, and mentioned that there was no indication of where to find the people who were putting the signs up. Definitely an interesting first interaction! People had definitely noticed the signs but were unsure of who was responsible for them or really what they were about. 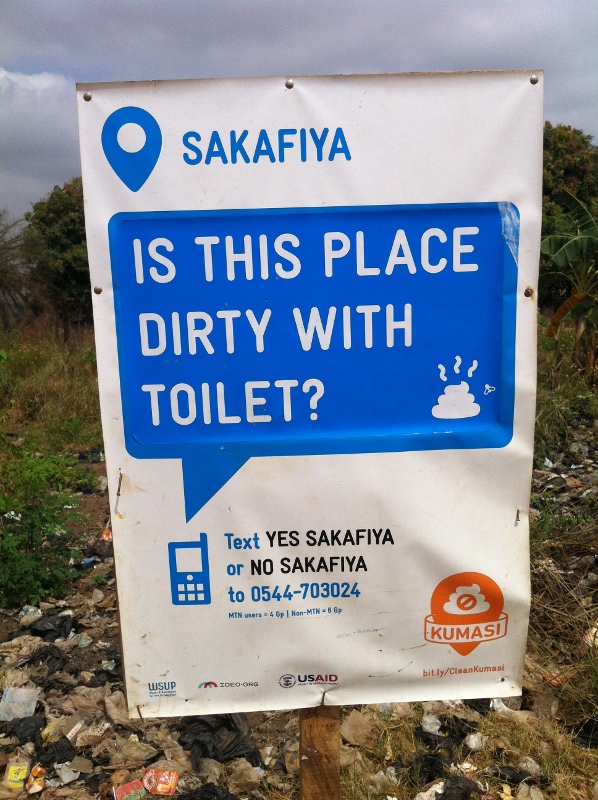 All photos credited to Mark Boots

Mark eventually got through to Doreen and she waved us over to where they were meeting. We tried to be as inconspicuous as possible (impossible task) and sat at the back of the room which was almost full of women and three men near the front. Fausti showed off some new posters and tried to demo a new service where people can call a number as opposed to texting, and it will call them back free of charge with info on the program. This seems like a great step forward to address the complaints of the woman we met earlier. The demo had some technical glitches and the meeting wrapped up with Fausti informing the group about the next possible meeting date. 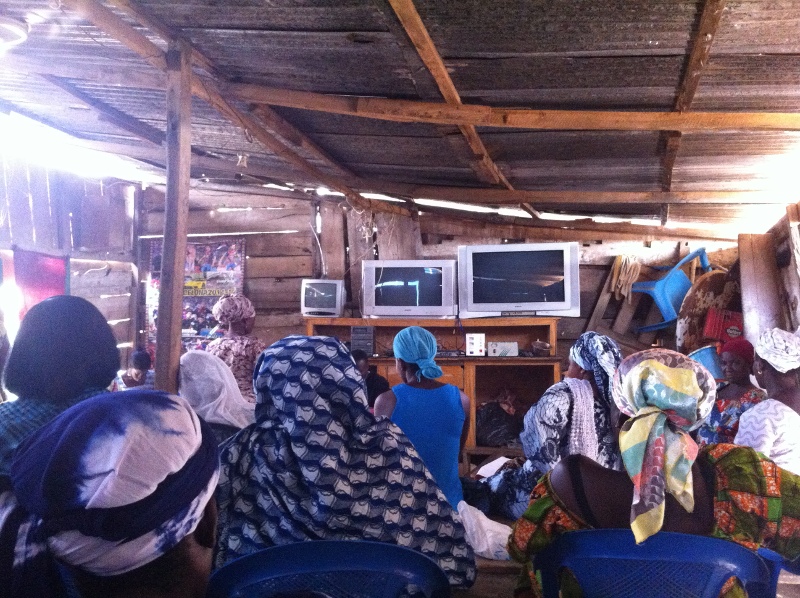 Our view from the back.

Afterwards we got to ask Fausti about the program and where they’re going with it. She explained some of the iterations they’ve done on the signage to make sure it was locally appropriate, a good reminder that even local staff don’t get language right on the first try and testing is important. They haven’t had much engagement through texting which is why they’re pivoting to a voice-based system. It will be interesting to see any increases in engagement. They’re hoping to get in touch with the people who engage with the system and get them involved in the CLTS process when they bring a trained facilitator later on.

This particular location is next to a school and is interesting but not atypical in Ghana in that it has latrines already but the children don’t use them. As if on cue, a group of primary children on break walked right past the latrine to do their business behind it amongst the litter spread out there. I wondered how past CLTS projects have engaged children in the process, as it seems that in this particular case a significant portion of the problem is children from the school. It will be interesting to see how a “triggering” as it’s called in CLTS would trickle down to the children, especially in a fairly large urban community where I imagine only a fraction of the community would be engaged in that event. 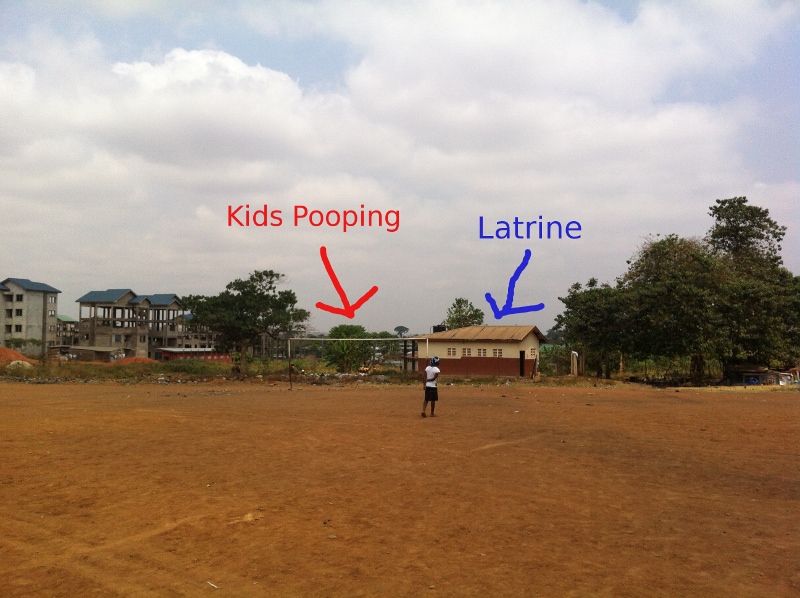 Mark and I discussed other ideas on the way home. It’s apparent that all of the signs that Clean Kumasi has put up are in areas where people dump garbage. We wondered what the effect would be if these areas were cleaned up and concentrated. Perhaps this is a broken window type effect, where existing garbage attracts more waste, where human waste isn’t really differentiated from garbage by children (and adults sometimes). This wouldn’t necessarily solve the problem but if there’s a correlation between garbage and poop then maybe cleaning up the garbage could make controlling the poop a bit easier. If it’s primarily children who are defecating outside then perhaps engaging parents and community members in keeping areas around latrines free of garbage would get schoolchildren using the latrines more often than making the trek out to a garbage zone that is relatively far away.

The quick analysis from Fausti was that children also preferred the outside to the dark latrines. Cement latrines are hot and are not the easiest to keep clean either. Perhaps there’s a place for rethinking latrine construction with a strong aim on ease of cleaning and brightness to make them a bit more habitable for the children. Another observation was that children seemed to head out to the garbage dump in groups – maybe single-stall latrines are not the right design when it comes to schoolchildren’s social behaviour. The experience for a child using the latrine is a dark, smelly room all alone as opposed to a (relatively) nicer-smelling garbage heap with his three best friends. Privacy is something I would optimize for from my perspective but it clearly has little influence on primary schoolchildren.

All in all it was an engaging few hours. I’ve never worked in the WatSan sector and definitely don’t know anything beyond the basics of CLTS but it’s always interesting to take a design lens to problems like open defecation and see where it takes things. I’m definitely looking forward to hearing more about how things progress with Clean Kumasi and IDEO.org as they continue to iterate on their approach and find out what works.

This entry was posted in Uncategorized. Bookmark the permalink.